Yes, now you can choose to play Demetrios without any "toilet" jokes! 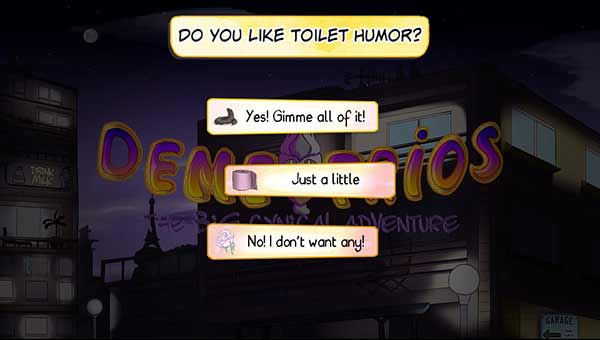 Some players didn't like this aspect of the game, so I've decided to offer them an alternative in order to enjoy the adventure.

When starting the game, you will now be offered three choices : play the game "as intended" (same version as before), with less "toilet" jokes, or without any. This also adds to the replayability of the game!

This update also adds a brand new music track to Nogo! There were only two music tracks in this part, so the soundtrack could be considered a bit repetitive. This should help!

Finally, Demetrios is now fully translated into Russian! Thanks to Tolma4 Team, a translation group who did a great job on this :)

This is a major update, it took a while to prepare (new translations required for the new text, altered graphics and sounds...) so I hope you enjoy it!