Can you believe it's been (almost) a month since the Kickstarter ended? I'm so focused on the game that time flies so quickly!

In addition to the already announced Spanish and German translations, I can now announce that Demetrios will also be translated into Italian! Two young professional translators (RuM Corp.se) have accepted to do it within my budget, and they're progressing pretty fast! They've translated some famous adventure games, so they'll probably do a great job!

Darn! That doesn't fit in the menu!

The German translation is also being taken care of by a professional translator, Marcel Weyers, who has also translated popular visual novels and adventure games. And there's more good news! He's already translated all the text for the demo! It stills requires proofreading, but I may be able to make the demo playable in German soon! (Although I'll probably wait to have all languages translated before releasing a new demo.)

On the development side, I've finished the first half of Chapter 5 and I'm making progress on the second half. I'm getting closer to the end of the game, so I'm afraid I can't show much without spoilers. But here's one screen without the lighting and with some important elements missing! 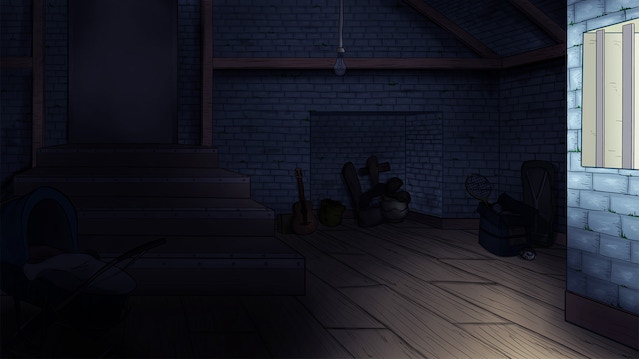 Yes, I agree, that doesn't look very interesting like this... Just wait till you see "the missing elements" :p

Finally, I've ordered the tee shirts for the 50 €+ backers, and I'm currently waiting to receive them. If you're concerned, you'll receive an email when they're sent!

If you've got any question, feel free to ask me!