Demetrios is a remake!

Demetrios is a remake!

With this update, I wanted to show you the work done on this remake.

When I've started working on Demetrios in 1999, my only programming knowledge was BASIC (I used it on my old Amstrad CPC computer)
So, when I got my first PC with a copy of Visual BASIC 4.0, this felt natural for me to use it to program the game!

Visual BASIC was very simple to use, and suitable to make a first person adventure game (it had windows and buttons, a way to display pictures...)

But it had many limitations : I couldn't use any transparency at all! So doing animations was a struggle, and animating a character on screen would have been impossible. So, no third person adventure!

Now, with Game Maker, I use PNG transparency all the time, and it makes everything so much smoother and easier to program!

Obviously, considering the technologic gap in 15 years, everything has been recreated from scratch.

When I first started this remake, I wondered whether to transform Demetrios into a third person adventure game, or keep it first person.

But after playing it again, I realized it worked great as a first person adventure - and maybe even better this way!

One big advantage of first person is there's no idle time. You don't have to wait for your character to move in order to get a reaction, and moving to another location is instant!

So, even though this game will "only" be 8 to 12 hours long (which is vastly underestimated, considering my latest progress!), it would require much more time to complete if this was a third person game, due to these idle times!

Although, when working on Demetrios, I was a bit frustrated by this, because I wanted to do something close to the Broken Sword series I loved so much.

This is pretty clear in the game : even though it's first person, it almost feels like a third person game instead, as the game relies so much on the characters and their expressions!

Visual BASIC also had a big issue : when moving to another screen, it would cut the music. So despite trying many things to find a workaround, there was no way for me to include a background music!

Fortunately, with this remake I've been able to fix that, and this gives a whole new dimension to the game! 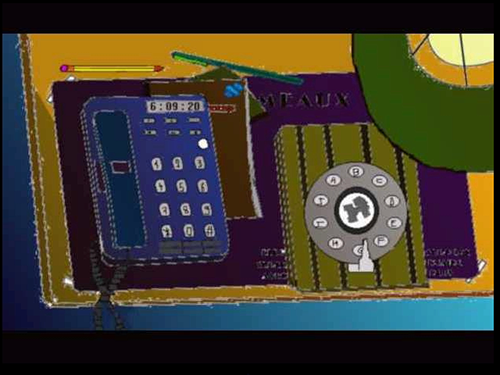 The very first (ugly) drawing done for Demetrios in 1999!

In 1999, I actually didn't draw (almost) anything! The drawings were made on paper by my brother Alain. While he's no professional artist, he did draw a lot of manga-style comics, and was a huge help by providing pretty much all the drawings!

I scanned them myself with a "hand scanner". This was awful to use and the graphics were often distorted because of that.
I've lost all the original paper drawings, unfortunately. All I have are the badly compressed game files. (So if you think paper is more durable than digital files... think again! :p)

For the new version, I re-drew everything directly on the computer with a graphical tablet!

The Paris map was a real map... I changed it to something prettier and more suitable

I did the coloring in both versions. Yes, really! That seems unbelievable considering the difference, but I swear I'm the same person who did both!

Back in the time, I did the coloring with a mouse, and I had absolutely no notion of coloring, lightning and shading. So the colors were very muddy and grey. It didn't fit the humor style of the game at all.

For the remake, I've taken some time to study how quality 2D traditional art was done from Disney and Studio Ghibli films, and this helped quite a bit!

Also, the program I used in 1999 to do the coloring was Paint Shop Pro, and this was the very first version to include layers! But despite that, I had no idea what those "layers" were, and I didn't use them. A huge mistake!

From the gameplay side, I've improved the interface to make it more ergonomic and modern.

For example, using an item was a chore in the old version. The inventory was one entire screen, and you couldn't know what item you were holding during gameplay.
You couldn't combine items, either! 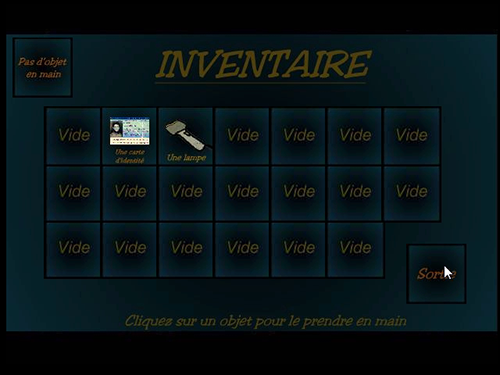 The interactions were very limited, too. There was only one sentence displayed when clicking on something. It wasn't contextual at all : unless you used the correct item, you wouldn't get another speech or anything.

That's one side of the game that I have totally changed. The new Demetrios is so interactive that it's almost too much! 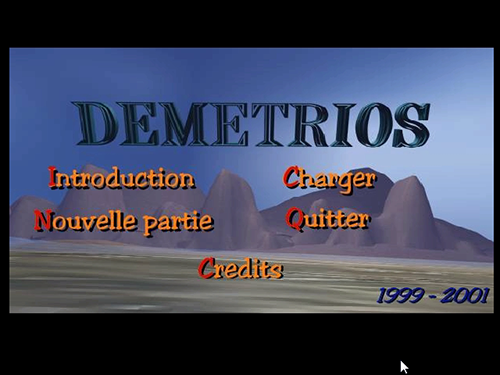 The old title screen. Yes, I did some CGI too!... And this was WAY out of place.

However, when it comes to the ideas and the events happening, I've kept absolutely everything from the original game.

Even the minor things that could seem silly, like the extra-terrestrial figure when clicking on the mirror in the living room, or the coffin in the bedroom. I hesitated to remove these because they seemed out of place, but decided against it.

I figured that despite being childish, they're the kind of things you don't usually see in adventure games. I want to surprise the player and make a game with personality!

To summarize, I can fairly say that all those mistakes I've done in the original version allowed me to make a high quality new version.

The new Demetrios is a unique combination of professional game making with the ideas of a 15-year-old - and that's something you don't see everyday!

And judging from all the feedbacks I've received so far... It works! :)

Thanks for reading, hope you liked it!